Joni Mitchell in the 70s: Court And Spark 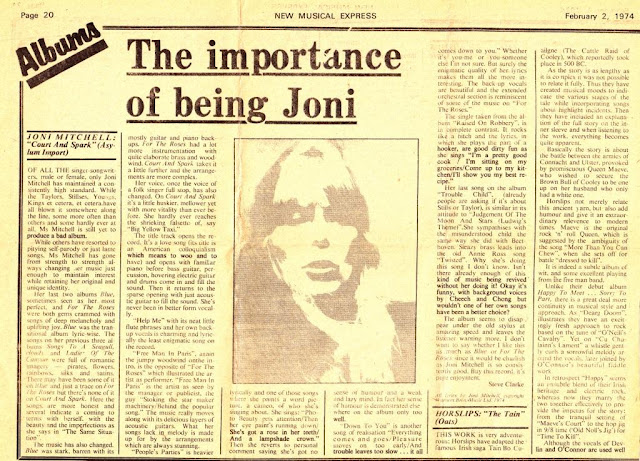 As her career progressed through the increasingly jazzy stylings of her mid-to-late 70s albums, the music press found it increasingly difficult to keep pace with Joni Mitchell’s development.  This was reflected in the gradual falling off of her audience in the second half of the decade.

No one in the rock era had done what she was doing, shifting from accompanying herself to fronting a group of jazz fusion players (Tom Scott and the L.A. Express) on tour in 1974. The live album ‘Miles of Aisles’ and the video clips that have surfaced in recent years (see below) show how much she was liberated by having these musicians to work with.

In 1974, with a new album ‘Court and Spark’, Joni was just entering that period where she had embraced being part of a band. She was able to bring in new ideas for song structure and guitar voicings that would form the basis of her explorations for the rest of the decade.

At this point, she was still accessible to a mass audience, and as the NME’s review of Court and Spark identified, she had progressed smartly, much more so than her contemporaries, Messrs Crosby, Stills, Nash and Young: “While others have resorted to pitying self parody, or just lame songs, Ms Mitchell has gone from strength to strength, always changing her music just enough to maintain interest while retaining her unique identity.”

The NME’s reviewer Steve Clarke recognised Court and Spark as a continuation of Joni’s excellent run of albums. He concludes his review by saying: “The album seems to disappear under the old stylus at amazing speed and leaves the listener wanting more.

"I don’t want to say whether I like this as much as 'Blue' or 'For The Roses' since it would be churlish, as Joni Mitchell is so consistently good. Buy this record, it’s pure enjoyment.”

He's right about the album seeming to be over in a flash. I've always felt that too, but I think it has something to do with the sequencing, the seamless flow of one track to the next. On side one the tracks are literally flowing into each other, from Help Me into Free Man in Paris into People's Parties into The Same Situation. There was clearly a lot of attention paid to making the album a cohesive whole.

The one song that does extend is the piano-led 'Down To You' with its sad yet beautiful reflection on insecurity, which is a bit of a theme running through the album. Overall though, the mood is upbeat, and positively joyous on some tracks. 'Raised On Robbery' is the most obvious example of Joni's attempts to play against type, with the band rocking out and the lyrics, for once, about nothing more than drinking and having a good time.

The signs were there, though, that Joni was looking to move away from the style of her earlier albums. For now, at least, the critics were still unanimously of the view that Joni was the queen of American popular song.

By her next album, 'The Hissing Of Summer Lawns' there were many who felt she had gone too far. Indeed, history shows that Court and Spark was the point at which she peaked commercially. Artistically though, she still had a long way to go, and much of her very best work was still to come.
'Help Me' recorded at the New Victoria Theatre, London, April 1974

This link contains the whole concert from London in 1974, but the visual quality is not the best

This selection from the same gig is much bettter

see also:
Joni Mitchell in the 70s - The Hissing of Summer Lawns
http://bangnzdrum.blogspot.co.nz/2012/06/joni-in-70s-2-hissing-of-summer-lawns.html

Richard Newell
I grew up in the 1960s and 70s, the classic era for rock and soul music. I seem to have accumulated a lot of stuff. So what you have here is a random walk through my jumble of ancient memorabilia and musty old vinyl.