‘Sunday Night at the Saville’ was a popular date on the rock calendar in 1967. Brian Epstein, The Beatles manager, had leased the Saville Theatre on Shaftesbury Avenue in London’s West End, to put on plays and pop concerts. It was at these Sunday Night shows that Jimi Hendrix first came to the attention of a wider audience. His first single, Hey Joe  was in the charts and the band were playing at various club venues in the south of England.

The Saville Theatre's classical three-tiered design and 1500 seat capacity offered a unique showcase for rock acts in such a central location. The Jimi Hendrix Experience played at the Saville a number of times in 1967.

A while back, a friend of mine casually mentioned he had seen The Who and Jimi Hendrix on the same bill in 1967, and that he still had the programme for 'Sunday at the Saville' on January 29th 1967. This was the debut appearance by the Jimi Hendrix Experience. It's a fascinating document of the time.
The cover was designed by the Dutch artists Simon Posthuma and Marijke Koger and their collective known as ‘The Fool’ – famous for painting the Beatles Apple store on Baker Street and for the inner record sleeve  design of Sgt. Pepper. 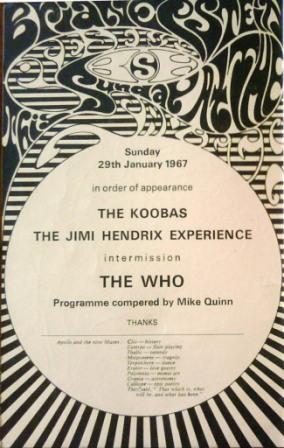 Inside, the psychedelic design reads, “Brian Epstein Presents This Sunday At The Saville…” The opening act was The Koobas, then the Jimi Hendrix Experience followed by an intermission and then The Who.

A few months later, at Monterey, Pete Townshend would win a famous argument about not wanting to follow Jimi on stage because his act was so explosive. But at this stage in January ’67, four months before the release of Are You Experienced, Hendrix was still developing his act. The flamboyant stage costumes were not apparent at this point but Jimi was already showboating and playing the guitar with his teeth.

The Saville Theatre program says of the Experience: “A couple of months ago the name of Jimmy Hendrix was unknown, and now his first release ‘Hey Joe’ has made the Jimi Hendrix Experience a household word. Hendrix, with bass guitarist Noel Redding and drummer Mitch Mitchell have rejected the traditional coloured group smoothness and plumped for an incredible gyrating dynamism that is both exciting and extraordinary. With fine lyrics, talented and professional musicians, a fresh original approach, and with you the audience, one lives the Jimi Hendrix Experience.”  The language certainly belongs to another age (oddly referring to the JHE as a 'coloured group').  The "incredible gyrating dynamism" is fairly appropriate though.

The Beatles themselves attended various 'Sunday Night at the Saville' concerts, including this first performance by the JHE. Two days later, Jimi and the band returned to the Saville to record a promo video for Hey Joe (see the clip below). They played another Sunday night show at the Saville on 4th February and did two shows there on the 7th May.

Then on 4th June 1967, The Experience played their last show at the Saville - supported by The Move and Procol Harum - before Jimi’s triumphant return to the US for the Monterey Pop Festival. At that Saville show, Jimi began the set with a performance of Sgt. Pepper’s Lonely Hearts Club Band. The Beatles album had only just been released that week, which shows what a huge influence the Beatles were on other musicians at the time. 1967 was an amazing year for music - a unique moment, never to be repeated, with such a concentration of talent and ground-breaking records being released almost every week. Hard to imagine now, but for all four Beatles to show up to see you play, you just know that Hendrix was the guy everyone on 'the scene' wanted to see at that point. 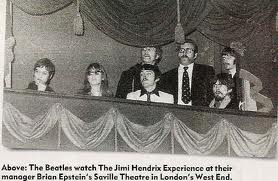 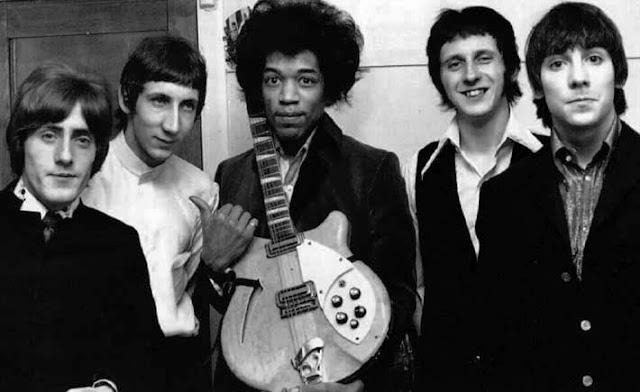 Jimi Hendrix with The Who backstage at 'Sunday Night At The Saville' in January 1967. Jimi is holding Pete Townshend's Rickenbacker guitar.
The Jimi Hendrix Experience - promo for 'Hey Joe'
filmed at the Saville Theatre, London, January 31st 1967

Jimi Hendrix Wows Them at Monterey, 1967


https://bangnzdrum.blogspot.com/2017/06/50-years-ago-today-hendrix-at-monterey.html
Posted by Richard Newell at 23:28

Email ThisBlogThis!Share to TwitterShare to FacebookShare to Pinterest
Labels: 1967, beatles, jimi hendrix, sgt pepper, the who

Richard Newell
I grew up in the 1960s and 70s, the classic era for rock and soul music. I seem to have accumulated a lot of stuff. This, then, is a random walk through a jumble of ancient memorabilia and musty old vinyl.