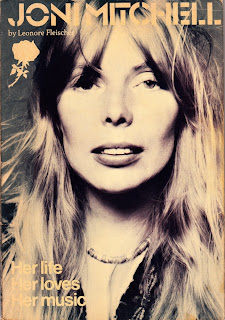 Context is everything and Joni’s achievement in crafting such a magnificent record as The Hissing of Summer Lawns was tainted by the negative reaction of the critics at the time, a reaction which now looks foolish.

The author Leonore Fleischer concluded her 1976 biography ‘Joni Mitchell – Her life, her loves, her music’, at the moment when Joni had just released The Hissing of Summer Lawns. It is interesting to note how the tone of the book changed at this point, as if the biographer was perplexed by the shift in her musical style.


Fleischer did a good job of dissecting the song lyrics, but her asides displayed her doubts as to the quality of the music. For example, she comments that Joni must have expected the puzzled reaction of fans, “for her dedication of this album is so long and so rambling as to be almost an apologia.” You can feel the sense of betrayal.

The biographer notes that with her previous album Court and Spark, “Joni had come a long way from the Newport Folk Festival days, and she had brought her audience with her every step of the way.”

Sadly, many of those loyal followers were to desert her after hearing The Hissing of Summer Lawns  – an album of beautifully crafted songs played by gifted musicians – but not what her audience was expecting. Although the album went gold upon release, it was the last major selling album of Joni's career. As she steered her art away from folk in the direction of jazz and world music, she drove away those who loved her for the simple, unadorned confessionals of the Blue album, and the breezy pop of Court and Spark. 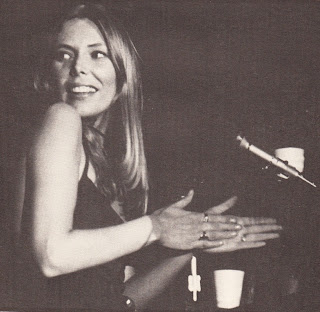 Joni herself described the reaction to ‘Hissing’ as the worst critical mauling she ever received. By no means all listeners were dismissive, but many critics and fans rejected her at this point, refusing to accept she wanted to explore new forms of musical expression.

Even now, after all these years of listening to it, I am still astonished by the sound of the record. On vinyl, you have not just the presence that all well mastered and pressed albums have; most notably, you have a mix that weaves the voices and guitars in a way that is truly exceptional. Certainly, this is not the work of some dilettante jazz wannabe, as was the common accusation at the time. This is sophisticated music, and played with such empathy by the band.

The quality of the music on display is unmistakeable from the opening guitar strains of ‘In France They Kiss on Main Street’. Joni employed the band that had accompanied her around Europe in 1974, Tom Scott and the LA Express. The band was augmented on various tracks by two lead guitar players, Larry Carlton and Jeff 'Skunk' Baxter, in addition to Robben Ford who provides the searing solo on In France… and the dobro on ‘Don’t Interrupt The Sorrow’. On backing vocals, she roped in messrs Crosby, Nash and Taylor.

It’s instantly different from what we’ve been accustomed to with Joni. Jazzy chords and a greater emphasis on rhythm and interplay. And if that wasn’t enough to contend with, she threw a spanner in the works with the second track. What’s this? Burundi drums and moog synthesiser? Lyrics that evoke jazz clubs and edgy urban scenes? This was another world entirely.

Seen in the context of what was to come during the 1980s, with the emergence of so-called 'world music', The Jungle Line doesn't sound that radical. But it appeared way before anyone had coined that term; way before Graceland and certainly pre-dating Adam Ant! It was a firm statement of intent and one that Joni consolidated on 'Don Juan’s Reckless Daughter', the natural follow-up to Hissing.


A more seamless follow-on track to the opener would have been 'Edith & The Kingpin', a beautifully realised production, weaving vocals into the smooth backing track in a way that still mesmerises me 40 years later (I’m listening to my vintage vinyl copy as I write this).

The pace picks up again with Joni’s distinctive guitar leading off 'Don’t Interrupt The Sorrow'. Again, the lyrics are a departure from the observational/confessional type her listeners loved her for, and whatever they mean, they are irresistibly cool and evocative.

Shades of Scarlett Conquering is a little closer to the sound and the feel of Court and Spark, with piano and strings as the main accompaniment, but it’s a fitting close to the first side of the vinyl record.

'In France They Kiss On Main Street'
from "The Hissing of Summer Lawns" by Joni Mitchell, 1975


The title track begins a sequence of songs on side two that deal with the complexities of supposed domestic bliss. The woman in the song has been given good reason to quit, but “she stays with a love of some kind, it’s the lady’s choice”.

The mood of sultry nights, of rich and exotic but less-than-perfect lifestyles, continues through The Boho Dance and Harry’s House, which drifts languorously into the Mandel and Hendricks tune ‘Centrepiece’ with a wonderful piano cameo by Joe Sample. Jazz, baby!

As Harry’s House fades out, the plaintive guitar intro of 'Sweet Bird' drifts in slowly and Joni is once again alone, facing the compromises and the disappointments of the modern world:

Golden In Time / Cities under the sand / Power, ideals and beauty / Fading, in everyone’s hands…

Which brings us to the final song, Shadows and Light. Joni and her voice. An invocation, a prayer, you can almost imagine you are in church. It’s a fitting end to a spiritually uplifting and absorbing album. One the most brilliant records I’ve ever heard.

But at the time, some people just couldn’t see it. The final paragraph of Leonore Fleischer’s book reads thus: “It would be astonishing indeed if The Hissing Of Summer Lawns reached the same pinnacle of success that For The Roses and Court and Spark did. It is so much less accessible. The songs are not singable by anyone but Joni; less melodic, less personally engaging.

"The album marks the emergence of a total new style for Joni, no longer on her Magic Princess trip. Still poetical, it has taken Joni away from her customary and very popular subject matter – the fragile nature of the heart and the complex byways it takes in its search for another heart – and into avenues of expression that many of her listeners may be too perplexed to follow.”

And so it proved. The British music press was appreciative of the album, hailing it as a new high water mark for the decade. But American reviewers were unimpressed, and history shows their criticism to be wholly unimaginative, now that 'Hissing' can be seen clearly as one of many creative peaks Joni reached in the 1970s.

For Joni, it was obviously a labour of love - a liberating experience to have her new compositions interpreted by musicians she trusted - having been on the road with them. And as history shows, over the next four years she fully justified her ambition, holding her own among some of the best musicians in the world.

There will be some who will say that from this period, they prefer Hejira. Fair enough, but that follow-up album to Hissing was fairly sparse musically and is chiefly admirable for its lyrical quality. I would contend that Hissing is far richer in its musicality, in the variety of the songs and the moods they evoke. As Joni herself said on the cover, “This is a total work”. 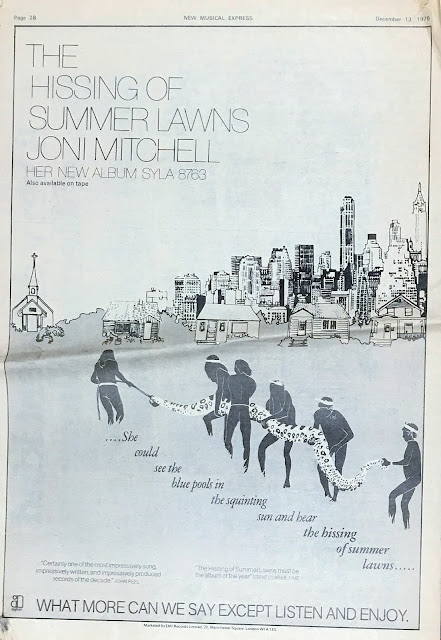 Richard Newell
I grew up in the 1960s and 70s, the classic era for rock and soul music. I seem to have accumulated a lot of stuff. So what you have here is a random walk through my jumble of ancient memorabilia and musty old vinyl.